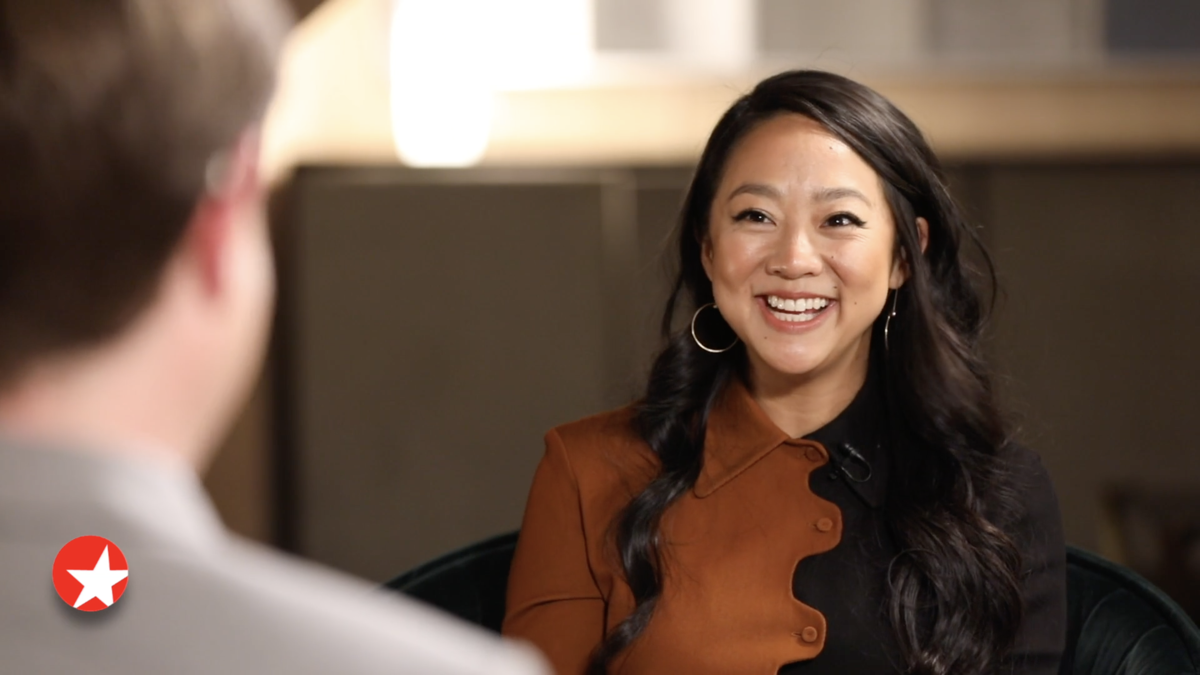 Broadway’s Stephanie Hsu seems to be everywhere, and her new film Everything Everywhere All at Once is proving why. The film, written and directed by Daniel Kwan and Daniel Scheinert, is a mind-bending, sci-fi action adventure through familial healing, generational trauma and perfectly timed humor. Hsu stars as Joy Wang, the daughter of characters played Michelle Yeoh and Ke Huy Quan. Broadway.com Editor-in-Chief Paul Wontorek chatted with Hsu at the Time Hotel in New York City about the film’s response, her Broadway work and more.

After premiering at South by Southwest film festival, the movie had a limited theatrical release and is currently in a wide release. “We’ve always really loved this film—it’s your wildest dream to make art and for people respond to it,” Hsu said. “But I don’t think any of us were prepared for everyone to be like, ‘It’s the best movie we’ve ever seen.’ That’s been really wild. In some ways it feels like Be More Chill on crack. When I did Be More Chill, there were a lot of young people who were also like, ‘I feel so seen.’ It’s an awesome feeling.”

In the film, Hsu parades around as both Joy Wang and Jobu Tupaki, the cross-dimensional beast at the center of the problems facing the newly discovered multiverse. “[Michelle Yeoh] is a true legend,” Hsu said about her co-star “She is so generous and I can’t believe I’ve been so lucky that I get to say that we were scene partners. I was really scared that I was going to be too weird for Michelle because one of my characters is a villain who blows up people’s heads into confetti and dresses as Elvis—things like that. One of the first scenes that I shot with Michelle was very weird. I had rehearsed it with the directors and all of a sudden I get to set and I’m like, ‘Oh my gosh, what have we done? You’ve turned me into a freak and now I’m about to unleash my freak to Michelle.’ I made them promise me that they would announce to the entire crew like, ‘OK, everybody, Stephanie’s going to get weird now.’ It was great.”

After making her Broadway debut as Karen the Computer in SpongeBob SquarePants, Hsu went on to star as Christine Canigula in the fan-favorite Be More Chill. “In so many ways, I feel like I snuck in through the back door of Broadway,” she said. “I got involved with SpongeBob before I even had an agent. I didn’t even want an agent because I was doing experimental theater. It’s always just been me following people that I really love working with with no expectation of where it will land, and things keep propelling into larger arenas. I feel so lucky because for me, it really isn’t about the climb. It’s really about making art that I believe in with people that I love. And it feels so affirming that it’s working.”

Watch the interview below, and head here to check your local listings for The Broadway Show. Hosted by Emmy-winning anchor Tamsen Fadal, it is the only nationally syndicated weekly theater news program.